Last night's tidal surge was close to the height of the one in December 2013.  There is flooding on the 3rd and 4th holes on the river course.  This will take a while to subside as all of the water has to drain out of a couple of flap valves in the river wall.  The water came close to the 4th green and covered most of the 3rd green for a while. 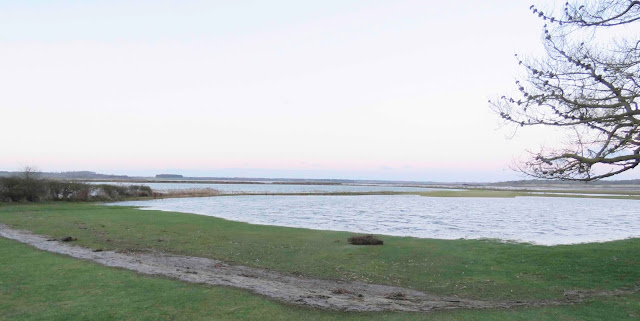 Posted by greenkeeping@aldeburgh at 13:58 No comments:

There was a tidal surge yesterday and the river over-topped the river wall but fortunately not enough to flood the river course.  The field left of the 3rd green was flooded to about 60cm.  There's another tidal surge expected tonight and I'll update this post if anything notable happens on or around the course.


Posted by greenkeeping@aldeburgh at 16:59 No comments:

December was a very dry month with a total of only 11.7mm of rainfall.  Despite this the course never really dried out, as there were many still, mild nights with heavy dew and several frosts. Temperatures were a little above average but nowhere near the extremes of December 2015.  The average was 6.4° (10.3° in 2015) whilst the maximum was 13.3° on the 25th.  We recorded our second lowest December minimum on the 28th with -5.1°, quite a contrast with the 3.8° minimum in December 2015.  The frequent frosts kept soil temperatures low so there was very little grass growth.

2016 weather in brief
The rainfall total was 463mm which continued the trend for annual rainfall well below the average of 540mm for 1979 to 2016.  The average for the last ten years is 457mm so maybe this is the new normal.  Rainfall early in the year was unremarkable but then we had a relatively dry May followed by a very wet June and dry July and August.  We finished off the year with the wettest month in November (75.6mm) followed by the driest in  December (11.7mm).  January was relatively mild followed by two months of temperatures close to average.  April was very cold - just when we were hoping for some grass growth and the trend for colder May weather continued.  July, August and September were all more than a degree warmer than the average (nearly 3° warmer in September).
October was fairly typical temperature-wise but November was very cold with the 2nd lowest average we've recorded and the lowest minimum with -3.7°.
Posted by greenkeeping@aldeburgh at 20:42 No comments:

Most of the earth moving and shaping work is finished in the new hollow behind the 7th green and the 8th tee is at the final levelling stage.  Recent hard frosts have delayed progress on this construction work but hopefully we’ll catch up over the next couple of weeks.  Work has started on cutting back and coppicing gorse and scrub around the course.  Coppicing work involves cutting leggy gorse down close to ground level with the intention of promoting dense new growth.  In other areas we will be opening up sight lines for foursome players walking forward and restoring the fairway, semi rough, rough, gorse progression where gorse has encroached too close to the fairway.  Gorse coppicing also gives us an opportunity to control bramble.  A new tee mat has been installed at the back of the main course practice ground.

Work will continue on the alterations in the 7th green/8th tee area and we hope to have this ready for turfing by the end of the month.  We will start work on the re-building of the 1st tee next week, the new tee will be larger and on the same level as the current medal tee.  Whilst work is in progress the recently installed tee mat will be used.  Gorse coppicing and trimming will continue, particularly if we get more cold and frosty weather.  Work may also start on digging out the base of stony bunkers and lining them with clean soil.  Due to the cold weather during November and December the growth of the seeded area at the back of the 18th green has been disappointing.  We have decided to turf the area as this will give us the best chance of getting the area back into play as early as possible.  The turf will be harvested from the bottom end of the putting green to provide the best match for the existing turf.  We will then extend and raise the lower part of the putting green to provide a flat area for practice.  Deep aeration of the greens is scheduled for next week but as always with this and much of the other work mentioned above, the work is weather dependent.
Posted by greenkeeping@aldeburgh at 20:41 No comments: