We've been doing some gorse coppicing and removal of sapling trees this week.  Every winter we cut down all of the tree saplings we find growing on the heath and treat the stumps to stop regeneration.  We find large numbers every year and without this work the open heath would become woodland within a few years.  This is important not only for maintaining the character of the course and the valuable heathland habitats but also for turf quality.  Allowing trees to grow would create shade and limit air movement which would have a serious impact on our ability to grow the finer grasses.

We do lots of gorse coppicing every winter, our aim is to coppice most of the gorse on a 10 to 12 year cycle.  If coppiced regularly the gorse plants recover quickly and produce dense growth which looks atractive and is good for wildlife.  Neglected gorse gets leggy, unsightly, full of bramble and has reduced value for wildlife.


Posted by greenkeeping@aldeburgh at 17:57 No comments:

Antony Kirwan our new Deputy Course Manager joined us last week.  He previously worked as Course Manager at Playgolf Colchester and before that at Colchester (Braiswick) Golf Club.  He's worked as a greenkeeper for 25 years and is a keen golfer, playing off a current handicap of 5. 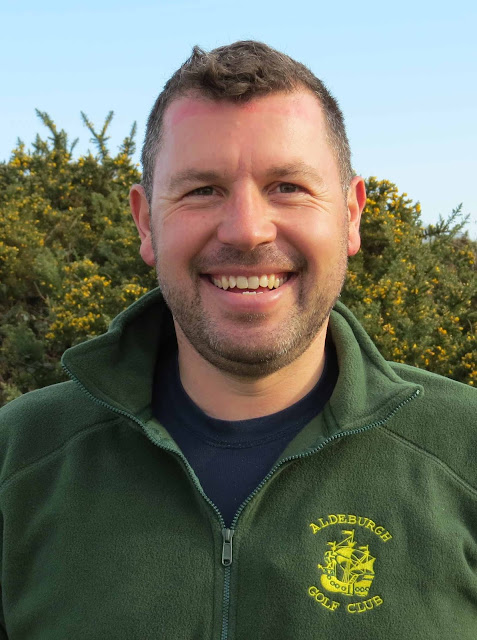 Posted by greenkeeping@aldeburgh at 17:35 No comments:

The servicing, repair and sharpening of our machinery is an important part of our winter programme.  The vast majority of this work is done in house by Jerry our mechanic and the rest of the greenkeeping team.  The work ranges from oil and filter changes to full overhauls and sharpening using our cylinder and bottom blade grinder.


Posted by greenkeeping@aldeburgh at 17:03 No comments:

We're making the red and yellow tees on the 4th hole into one big tee on one level.  Although the overall footprint of the tees is only being increased by a little we'll gain much more useable teeing area, (effectively doubling the size of the tee).  We've stripped the turf and topsoil and made the slope on the left of the tee less steep to make access easier.  The next stage is to install the irrigation and then the rootzone mix.  The tee will be turfed in late February or early March and will be ready for play by mid to late summer.


Posted by greenkeeping@aldeburgh at 16:50 No comments:

December was amazingly warm, the mean temperature was the same as November at 10.3°, nearly double the 5.3° average and more than 3° warmer than the previous record of 7.1° in 2013.  The maximum temperature was 15.2° on the 22nd and the lowest 3.8° on the 9th.  Rainfall was much lower than normal with 27.6mm compared with the 50.9mm average but unusually we had at least some rain on 28 days of the month so it was always wet despite the low total.

The annual total rainfall for 2015 was 454.9mm compared with the 544mm average.  July was the wettest month with 61mm followed by August with 54.2mm.  April was the driest month with 13.4mm.
Posted by greenkeeping@aldeburgh at 20:32 No comments:

Just before Christmas we had a visit from some cattle that had escaped from the town marsh.  Unfortunately they chose to have a wander on the newest and most delicate turf on site - the new 3rd green and 4th tee on the river course.  The damage was quite extensive but after a big effort from the greenkeeping team the green was playable by the end of the day.  The hoof prints were like massive pitch marks and each one had to be gently teased back to the correct level.

Posted by greenkeeping@aldeburgh at 18:48 No comments:

We've just finished work on renovating the front left bunker by the 12th green.  Over the years the back edge of this bunker had been scoured away creating a step that made access to the bunker difficult.  We re-shaped the back edge reinforcing it with artificial grass and raised the sand level in the central part of the bunker.  The slope into the bunker has been eased and extended to improve access.  Please use the right hand end to enter the bunker whilst the turf gets established.

Posted by greenkeeping@aldeburgh at 18:37 No comments: