Arthur Whiting retires next week after 18 years working on the greenkeeping team.  There was a presentation in the clubhouse today to mark his retirement and many members gathered to thank him for his years of excellent service to the club.

Arthur is the sort of person that every manager wants on their team - always willing, quietly getting on with his work and getting on well with the rest of the team.

We all wish him a very happy retirement.


Posted by greenkeeping@aldeburgh at 17:56 No comments:

The Poa annua (Poa) in the greens is flowering at present and it will be evident to members that there is a higher percentage of this weed grass than in previous years.  The reasons for this are three fold:-
·         The last two winters have been mild and wet and these conditions are ideal for Poa, which is a winter annual that sets its seed in the spring, germinates in the autumn,  establishes over the winter before seeding again.

·         The summer of 2014 was wetter than average so we had few opportunities to dry out the greens.  Poa dies back under drought stress which is our main weapon against it.  Our inability to create such stress during the summer meant we came into 2015 with a higher than normal percentage of Poa in the greens.

·         The colder than average weather this spring has given the Poa the opportunity to get established with little competition from the slower growing fescue, which also starts growing later in the spring, and has given rise to the increased seeding we now see.

The importance of keeping a low percentage of Poa in the greens can’t be overemphasised as it is the fine Fescue and Bent grasses that give us the highest quality and most consistent year round putting surfaces.  Our entire maintenance programme is formed around encouraging the finer grasses and discouraging Poa.  Everything from height of cut and fertiliser programme to aeration has an impact but moisture levels in the soil are the strongest influence on the ability of Poa to get established and survive in our greens.

The increased level of Poa currently present in the greens means we will be taking an aggressive approach to removing it through cycles of drying out whenever the weather permits.  During the drying cycles members may notice the greens being a little firmer than usual with the potential for loss of sward density as the Poa dies out.  Whilst we will monitor and control these cycles very carefully this essential action may have a short term negative impact on the quality of the putting surfaces.  However, it is necessary to prevent long term deterioration and maintain our reputation for high quality greens all year round.

We are expecting delivery of a new over seeding machine next month and this will be used over the next few years to continue our programme of sowing high quality fescue cultivars into the greens.  Having our own machine will enable us to choose the optimum moment(s) during the year to undertake this over seeding rather than having to book a hire slot several months in advance in the hope that the weather conditions are optimal when it arrives.

As highlighted in the Course Development Plan increasing the percentage of modern fescue cultivars, which have far superior performance to the old varieties present in our greens, is a central part of our strategy for maintaining and improving green quality over the coming years.  These cultivars produce a denser, finer leaved turf which is more resistant to Poa ingress than the more open turf produced by the older cultivars.  As these modern cultivars fully establish the need to undertake aggressive drying out cycles, such as planned this year, will diminish which will also assist in maintaining high green standards going forward.
Posted by greenkeeping@aldeburgh at 17:11 No comments:

The ever popular annual wildlife walk took place this morning under cool and dull conditions. This year our leader was Steve Piotrowski - an independent environmental consultant who runs many bird identification courses for the British Trust for Ornithology and the Field Studies Council.  Steve did an excellent job of imparting his knowledge of birds, particularly given the wide range of abilities of those attending.  I think we all came away having learned something.  We saw or heard a total of 38 bird species which is a record for these walks.  This total is all the more impressive when we factor in the late arrival of birds such as whitethroat and willow warbler which we would normally expect to see on the course in late April.  The highlights of the walk were woodlark nesting on the course, several whimbrel on the set aside and a ring ouzel passing through (probably on its way to Scandinavia).  At least five nightingales were heard, two red deer were seen in the woodland and we had very good views of a fox making a hopeless attempt to catch up with a flying pheasant! 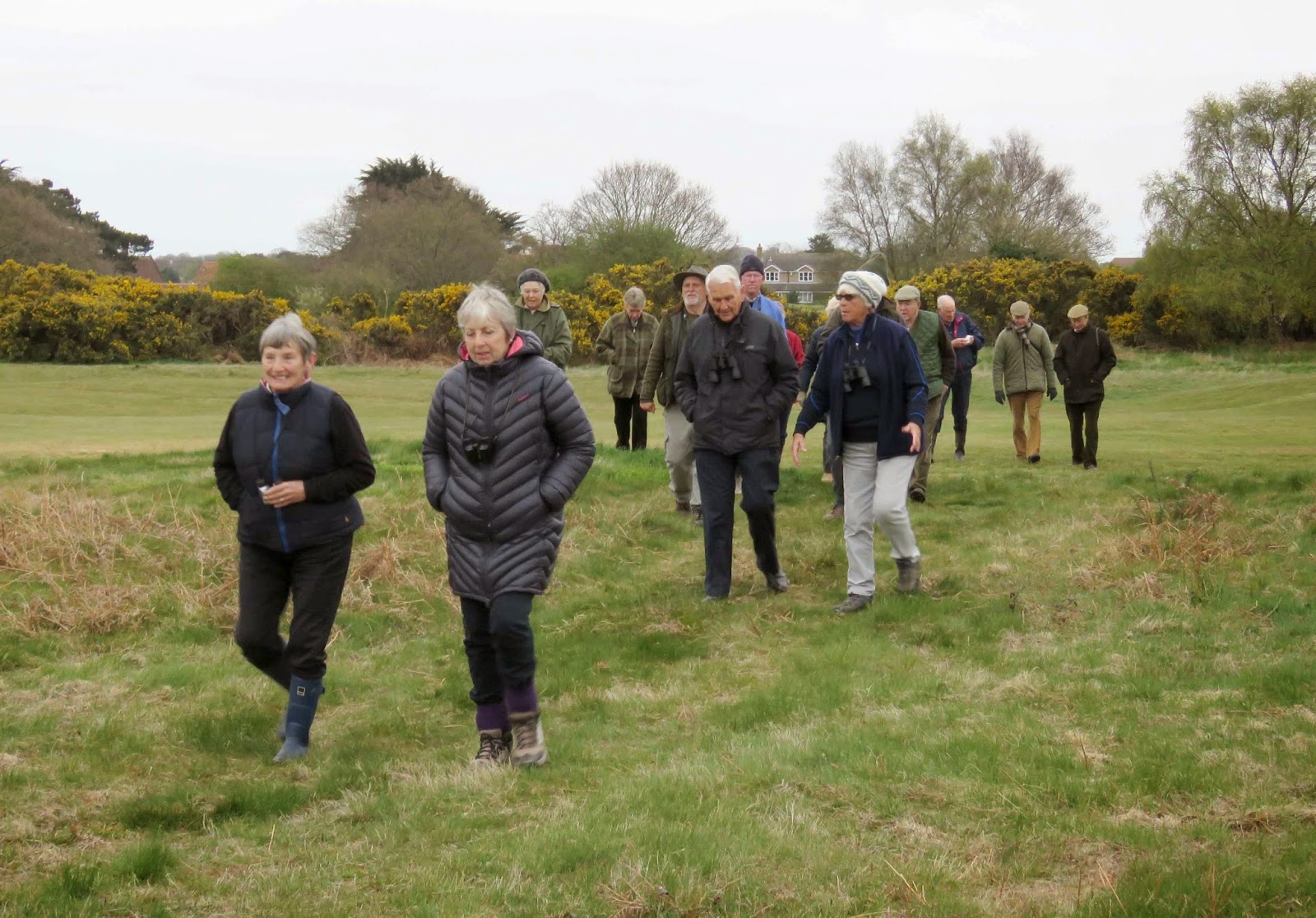 Posted by greenkeeping@aldeburgh at 17:28 No comments:

This is the best time of year to see many of the resident and migrant birds that are present on the course.  There are lots of singing linnets and yellowhammers establishing territories and at least two woodlark have been present.  The first of the spring migrants have arrived, chiffchaffs have been around for a couple of weeks and I heard my first blackcap on the 8th of April.  Little egrets are regularly seen on the river course, particularly by the new pond on the 4th.  I expect the first nightingales to start singing this week, most years we hear our first on either the 14th or 15th of April.

Some of the tiny wild flowers are taking advantage of this period before the larger plants and grasses get going.

Posted by greenkeeping@aldeburgh at 20:30 No comments:

Recent work on the course

The first top dressing was applied to the greens and tees during March as was the first fertiliser.  We use lawn sand fertiliser to start things off in the spring as it's fast acting and helps to control any moss that has got established over the winter.  The fairways were cut for the first time towards the end of March which contrasts with 2014 when they were cut in mid February.  Grass growth is picking up and over the next few weeks mowing will take up more and more of our time.  The shelter at the 5th tee was falling apart so it has been replaced.


Posted by greenkeeping@aldeburgh at 20:03 No comments:

March was a dry month with a total of 19.5mm which is just over half the average.  The vast majority of this rain (16.6mm) fell in the last week so for the first 3/4 of the month we had drought conditions. The temperature was close to average at 6.8° but it felt much colder in the relentless winds.  The maximum temperature was 15.1° on the 28th and the minimum 1.1° on the 23rd.

Grass growth has been minimal in the first three months of the year,  We're about 5 weeks behind 2014 in growth potential but 3 weeks ahead of 2013.  (2014 was our warmest spring on record with 8.4° and 2013 our coldest with 2.9°.)  The monthly average temperature figure can mask big variations in grass growth potential.  When the daily average temperature remains below about 6° there is minimal grass growth but we can get the same monthly average with the daily temperatures hovering around 6° as we can during a month when temperatures fluctuate between cold and warm spells.  In the latter example we can get significant growth during the mild spells but in the first there is none.  On the 26th of March this year we had reached 43.6 points on our degree day model (A measure of grass growth potential),  in 2014 we had reached this level by the 14th of February and on the 26th March 2014 we had reached 135.7 points.


Posted by greenkeeping@aldeburgh at 19:30 No comments: