Aeration is a key part of our maintenance programme.  Jim Arthur, our STRI agronomist in the 1970s and 1980s stated that aeration was the most important aspect of turf management.

Why do we aerate?
Technically, when we aerate we are increasing the air content of the soil, by increasing the amount of pore space between soil particles.  The aeration work counteracts the compacting effects of foot traffic and maintenance machinery.  Every footstep and machinery pass pushes soil particles closer together, reducing pore space.  With increasing numbers of rounds being played (particularly winter golf.) and more intensive maintenance such as rolling, the need for aeration is greater now than it has ever been.


What are the benefits of aeration?

What happens if we don't do enough aeration?

All of the bullet points listed above as benefits of aeration are turned around.  Compaction increases leading to impeded drainage and softer surfaces that are even more prone to compaction.  The weed grass Poa annua gains a big advantage in compacted soils and the finer fescue and bent grasses struggle to survive.  Ultimately we would end up with soft, thatchy, bumpy, slow and disease prone greens and the need for temporary greens and even course closure in winter.

The disadvantages of compacted soil can be clearly seen on areas of the course subject to concentrated traffic.  In these areas the finer grasses do not thrive and the sward is dominated by Poa annua and Ryegrass.

Although we have the advantage of soil that is sandy and naturally well drained, we still need to do aeration work to maintain the soil in that state and prevent the deterioration that would be inevitable without it.  There are examples locally of golf courses on equally well drained soil with greens that are soft in winter and where foot-printing and deep pitch-marks are a real issue.  At Aldeburgh the aeration work we do is not remedial work to solve problems as it is at many clubs.  We aim to at least maintain and if possible improve on where we are now.  There is nothing new about this, we have STRI agronomists reports dating back to the 70s that recommend frequent (up to weekly!) aeration work on the greens.  A common thread that runs through the reports and advice of all of the agronomists visiting Aldeburgh over the last 40 years is the need for an effective aeration programme.

The majority of our aeration work is done during the winter months and we aim to alternate between deep and shallow aeration.  Summer aeration is also beneficial and we fit it into the work programme if we can but with a full fixture list it can be difficult to balance short term disturbance with our long term goals.  We aim to aerate five or six times over the winter (October to April) and at least twice during the Summer.  If levels of play continue to increasing and more frequent mowing and rolling become the norm we will have to increase the amount of aeration work we do.

Aeration work has been a fundamental part of the maintenance programme at Aldeburgh Golf Club for over 40 years.  It gives us the well drained, firm conditions that set Aldeburgh apart from many clubs.  It is essential for promoting healthy soil, a healthy, fine grass dominated sward and better playing surfaces all year round.
Posted by greenkeeping@aldeburgh at 14:23 No comments:

The 8th tee alterations and the new hollow behind the 7th green have been turfed and good progress has been made on the 1st tee.  With favourable weather the 1st tee should be ready for turfing in a couple of weeks.  Some changes have been made to the fairway irrigation on the 2nd and 14th fairways.  In both cases the line of the fairway has been altered and the pipes and sprinklers needed to be moved to match.  Work has started on installing irrigation in the area between the clubhouse and the 1st tee.  This is an area of high wear and without irrigation, we’ve struggled to keep good grass cover.  Although the very cold, frosty period in January slowed progress on the construction projects, we were able to make good progress on gorse coppicing.  We also did a bit of work cutting back encroaching gorse and breaking up large stands of gorse, particularly where bramble was taking over.  There has also been good progress on woodland management where a substantial block has been thinned.


We’re a little behind with our aeration programme due to the hard frosts we’ve recently experienced, so we’ll be intensifying both deep and shallow solid tine aeration.  Deep aeration of the fairways will start and we hope to do shallow tining of the greens during the next week, with deeper aeration later in the month.  We aim to have the 1st tee levelled and turfed by the end of February and the re-turfing of the damaged area on the 18th green will be done over the next couple of weeks.  We may dig out one or two of the stony bunkers and put in a base layer of clean soil, to prevent stone coming to the surface.
Posted by greenkeeping@aldeburgh at 13:10 No comments:

January was colder than average and much colder than the last four years.  The average temperature was 4°, with a maximum of 10.3° on the 11th and a minimum of -2.7° on the 22nd.  Total rainfall was  a fairly low 31.6mm, the long term average is 46.6mm.  There were hard frosts on about half the mornings and on several occasions the ground remained frozen solid all day.
Posted by greenkeeping@aldeburgh at 09:49 No comments:

New irrigation pipes and control cables have been put in on the 2nd and 14th fairways to deal with the changes to the fairway lines on these holes.  The new 8th tee and 7th green surround area was turfed on Thursday.

Posted by greenkeeping@aldeburgh at 19:33 No comments:


Our 1st assistant greenkeeper, Danny Perring is leaving to take on the job of Course Manager at Gorleston Golf Club.  Danny started work at Aldeburgh ten years ago as an apprentice greenkeeper and right from the start it was obvious he had great potential.  We wish him all the best in his new role . 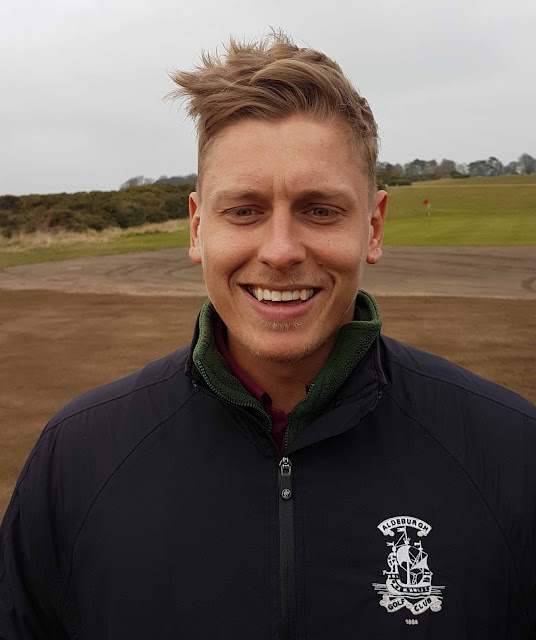 Posted by greenkeeping@aldeburgh at 19:20 No comments:

Recent and ongoing work on the course

We've installed a new mat on the main course practice ground, plenty of gorse coppicing has been done recently and we're making good progress on the 8th and 1st tees.

Posted by greenkeeping@aldeburgh at 19:10 No comments: